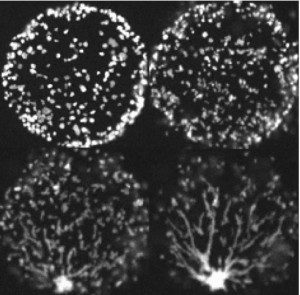 A field of single-cell amoeba Dictyostelium under a microscope view. The amoeba are starved for nutrients, and in response start a program of intercellular communication. As a result, they start moving in a directed fashion to an aggregation center (lower panels), until they assemble in a multi-cellular slug. (Credits: Thomas Gregor, Princeton University)

In physics, systems of simple interacting elements often give rise to remarkably rich collective behaviors. One of the most prominent and well-studied examples are phase transitions in Ising-like models. In biology one often observes similar collective effects as well: groups of fish transition between a variety of swimming, rotating and swirling patterns and successfully evade predators, single-cell amoeba signal to each other to find and migrate to an aggregation center, and thousands of birds flock above the trees and make decisions about where and when to land.

We look for simple models of group dynamics that we can build up from the data. We start either by constructing individual-based models and asking whether they explain the group dynamics, or by directly inferring probabilistic models for groups from data and asking what they tell us about functional interactions between individuals, as well as about their function.

The group is also broadly interested in other dynamical phenomena related to information processing in biological systems, such as the dynamics on social networks or emergence of linguistic traits.